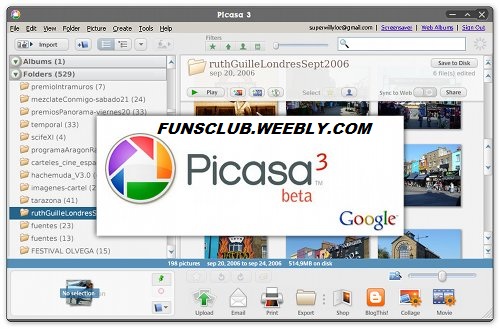 Picasa is an image organizer and image viewer for organizing and editing digital photos, plus an integrated photo-sharing website, originally created by a company named Lifescape (which at that time may have resided at Idealab) in 2002 and owned by Google since 2004. "Picasa" is a blend of the name of Spanish painter Pablo Picasso, the phrase mi casa (Spanish for "my house") and "pic" for pictures (personalized art). In July 2004, Google acquired Picasa from its original author and began offering it as freeware.

Native applications for Windows XP, Windows Vista, Windows 7 and Mac OS X (Intel only) are available through Google Labs. For Linux, Google has bundled Wine with the Windows version to create an installation package rather than write a native Linux version, but this version is severely out of date (the latest Windows version, however, can be run with Wine; see the Linux section). There is also an iPhoto plugin or a standalone program for uploading photos available for Mac OS X 10.4 and later.